Newsletter from 24th to 30th April 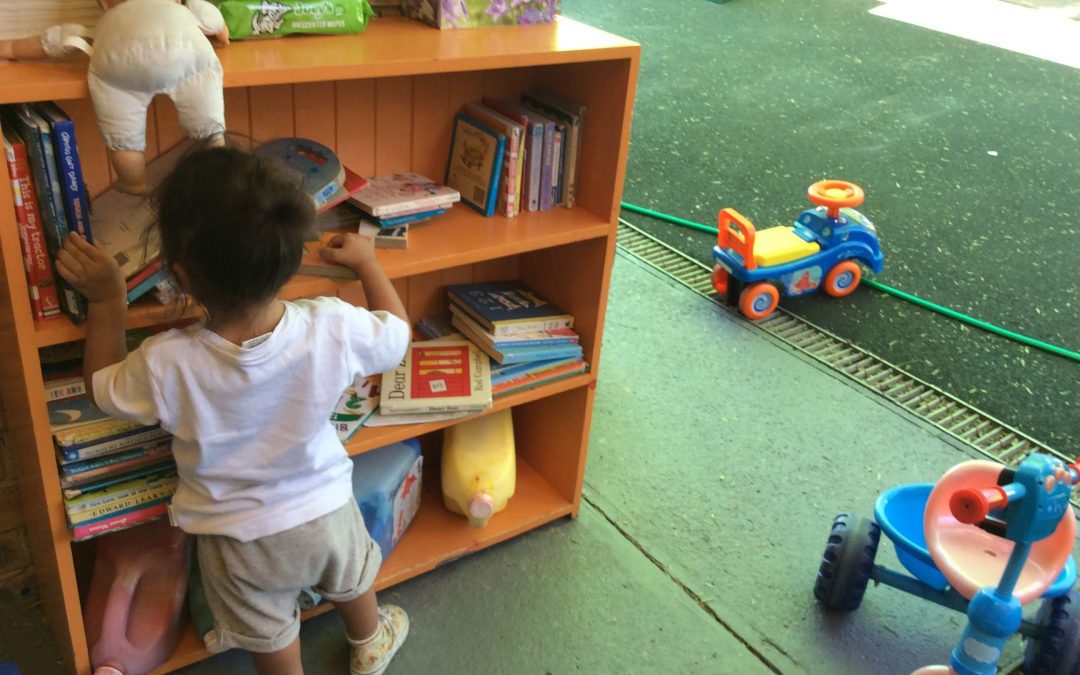 During the previous weeks, some of the toddlers have shown an increasing interest in vehicles so, this week our fantastic teachers have followed their lead and now they are having a deep look into the different kind of vehicles through experiences that allow children to improve thir memory, sorting and fine and gross motor skills. On the other side of the building, we are going back in time. Since the preschoolers suggested to put some dinorsaurs in the farm table, those are taking over and we are stating to learn more about those misterious animals that use to reing in the world thousands of years ago.

In the babies room we welcomed a new addition to the crew, Talulah who is addapting really well under the vigilant eye of his brother Tasman.

This was the time to talk about soldiers. We took note of their uniforms and talked about the functions of their clothing. Then, we used some pictures of soldiers to trace the uniforms using the light table. Tracing is an important pre-writing skill that will help us get ready to school.

Monday 27th April: The beginning of the Dinosaurs!

On Monday we talked about eggs and what comes from eggs. We read a story of finding an egg, and we looked at some real ones. Later on, we heard some hatching sounds outside so we decided to go an investigate. Surprisingly, we found some little eggs that were about to hatch and from inside them…BABY DINOSAURS!!!!!  Children were invited to draw their interpretation of a dinosaur, as part of a pre-assessment of their current knowledge and understanding. Drawing based on a topic teaches children visualisation and helps them to map out mental images of the world they see and imagine around them. It encourages coordination, concentration, understanding, and has cerebral and analytical benefits.

On Tuesday, we learned some more about dinosaurs as we touched on what makes a dinosaur a herbivore, a carnivore or an omnivore – we discovered that WE are omnivores, much to the delight and humour of many! We played a hunt-and-match game, where we had to find paper bags containing a hidden surprise, and eggs (reconfirming that dinosaurs come from eggs). Then we had to match the number on the egg to the number on the paper bags we had found. When we opened the paper bags, we found out who came from the same number egg – dinosaurs! Matching games help children to improve their concentration, train visual memory, increase short term memory and increase attention to detail. They help children to improve the ability to find similarities and differences in objects, to classify objects that are grouped by similar traits, and improve vocabulary.

On Wednesday, we talked about what dinosaurs need: shelter, food, water. We went deeper into our understanding of herbivores, carnivores, omnivores, and we used a table drawn on the blackboard to learn about the different features of herbivores, carnivores and omnivores. We looked at some pictures of dinosaurs and as a group, decided which category they would fit into, sticking them onto the blackboard with blu-tack. We talked about some of the foods in these categories and drew these onto the board, too, and then we had the opportunity to express our understanding in some drawings. Then we made a table in a paper using rulers to make the coulmns in straight lines. We also practice our skills as sculptors by trying to make dinosaurs out of playdough. We ended up creating a common branchiosaurus.

Today, we had a look at the different time periods of dinosaurs in relation to us (Triassic, Jurassic, Cretaceous). We discovered they had lots of differences between them, in the first one, the dinosaurs were rather small and lots of them hunted in the water. The second period, Jurassic, was the time for the giant dinosaurs. Whit much more trees and grass the long necks took over the world. During the Jurassic period, the famous T-Rex, had to live in a rapidly changing enviornment. The volcanic network would have been highly active, with cracks and craters belching lava and ash. To experience what they lived, we prepared a volcano obstacle walk in our classroom using stools, tables, pillows, blocks, egg boxes and even a covered up ball pit. We switched the lights off and got ready to practice our gross motor skills and balance throught the bumpy volcanic floor.  Some torches made our exploration a bit easier. 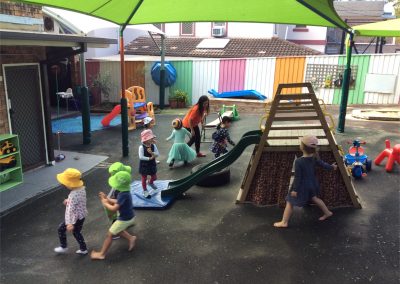 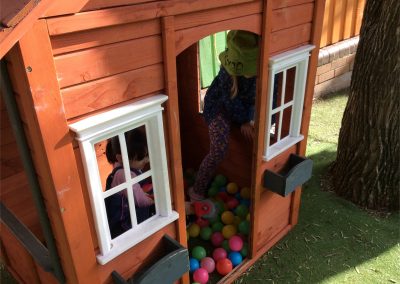 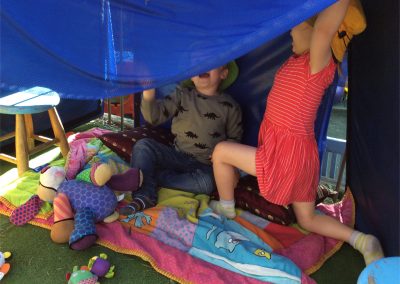 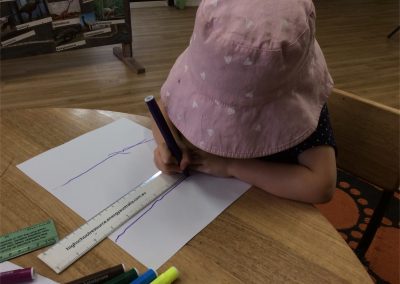 Learning how to use a ruler 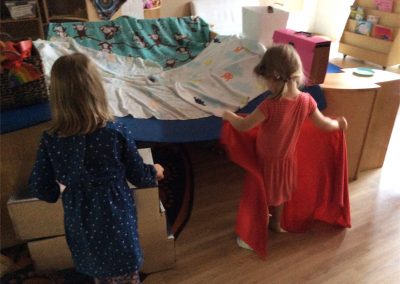 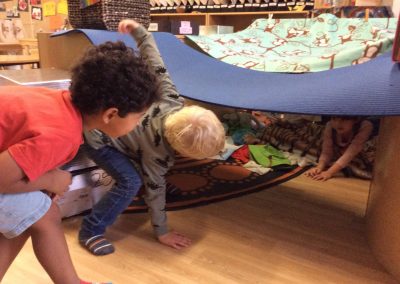 OH NO! the dinosaurs discovered us! 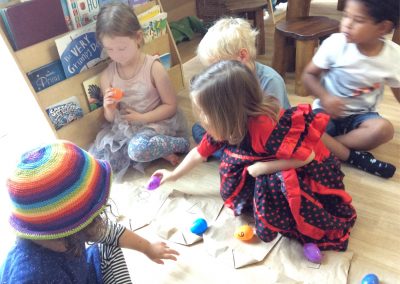 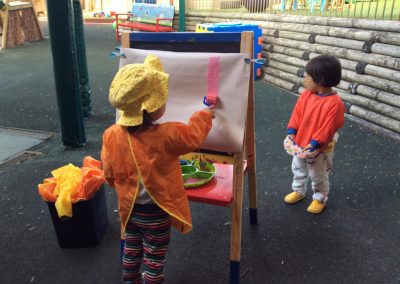 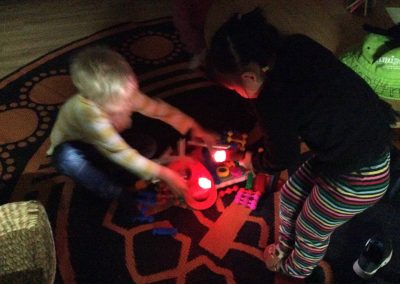 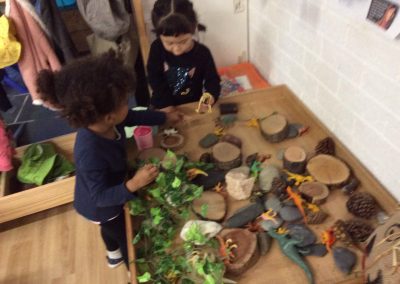 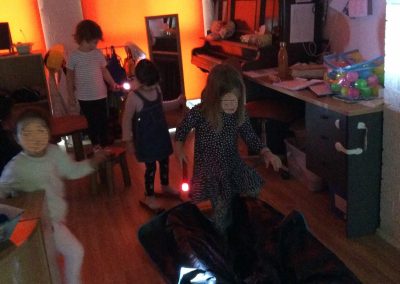 We keep working with the transports, this time we have decided to make a puzzle with the different types of them. We talked about which transports goes in the water, in the air and on the land. Then I provided a puzzle where children had to match the pieces with the images there were displayed on the big paper. This experience helped children to understand more about puzzle and work on memorizing and cognitive skills. Children were asking to do this activity again letting us know that they were enjoying that.

To keep improving children´s fine motors skills, we planned to make cars using recycling materials. Children were able to create their own cars using their creativity. We provided different colors, decoration, stickers and more open-ended resources to make them find their interests, likes and finding their sense of belonging. We also encourage them to reuse materials to help the world, increasing their environmental awareness and learning how to respect the environment and look after it.

tuesday 28th April: Don’t go out of the road!

Working on the gross motor skills and eye hand coordination, children helped to make a big road on the paper. We encouraged them to make it in different way (zig zag, straight, wavy…). Then, matching the cars with the colors of the road, we raced each other trying to follow the road. To make it challenging and interesting, we tried to make circles and always being inside of the line. Children laughed and shared with their peers, making racing and exchanging the cars between them, working on their social skills.

Construction zone! We provided different types of resources with different colors and textures. We played pretending play making them load the trucks with these resources and dispatch it in the correct spot. When they got to the unloading port they had different boxes with a picture of each material so children needed to use their problem solving skills to deliver the cargo in their respecting boxes. They had so much fun touching the sand, the jelly balls, the pompons, sand and rice, enjoying sensorial experiences and learning from them.

Learning about shapes; After watching a video where they explained basic shapes such as square, triangle and circle, I asked each child to come in the middle and draw the shape they were learning. Most of the children were able to do the circle but they showed a bit of weakness to make the rest. Then we moved to do the shapes but this time with cars. Children were moving the cars from one point to other, making the square, triangle and circle. This way was much easier and interesting, children are learning new vocabulary in Spanish and learning new skills. 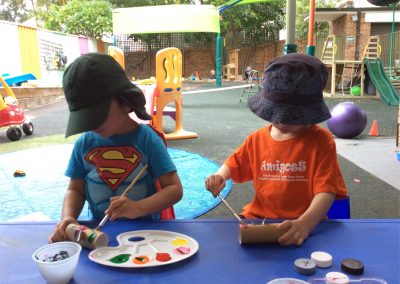 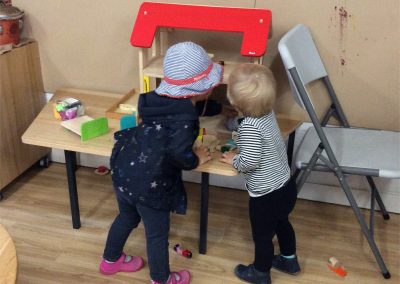 Playing in the doll house 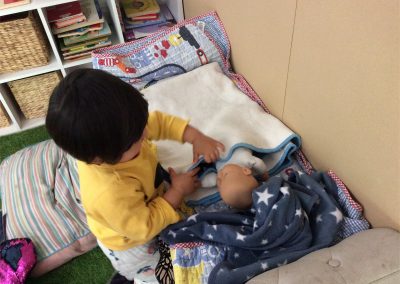 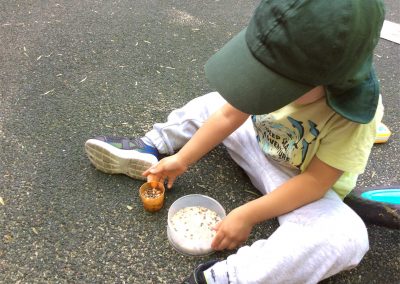 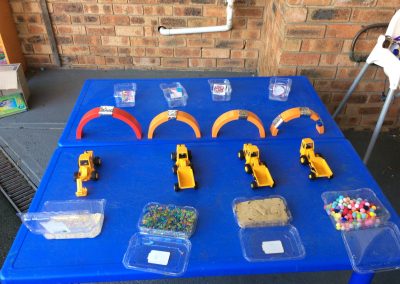 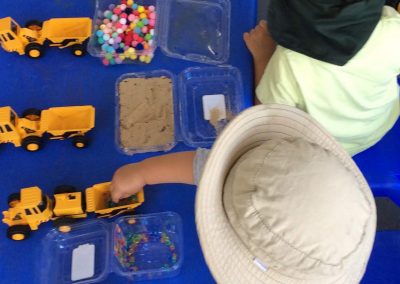 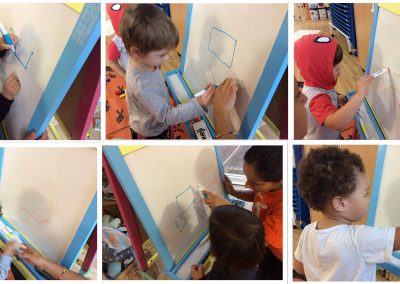 More babies came this week, a new crew addition Talulah and our old sailor Thomas. We are happy to say that both of them look pretty happy to be on board. Continuing with the topic of the farm, we’ve explore more of the animals. This week was time for the chicks’. We saw the history of the chick and learned the song of the chicks in Spanish. To better recreate our learning, I decided that the baby would make his own chicken with recyclable materials. While the baby was painting we had also learned about the color yellow. It was a very fun experience where we could practice new vocabulary helping the baby to develop their communication, we also practiced fine motor skills and gross motor skills dancing the song of the chicks say pio pio pio. The new baby had been crawling around the new environments improving her gross motor skills and sensory skills. She enjoyed playing in the sandpit with his brother. Babies are also getting used to the routines of the centre. 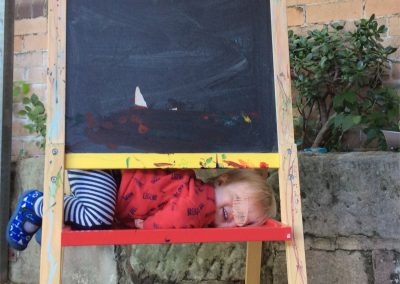 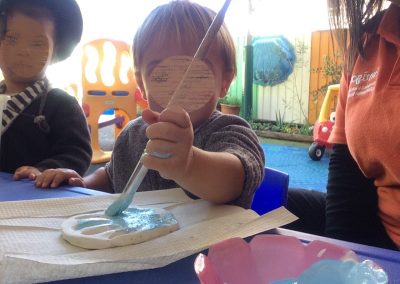 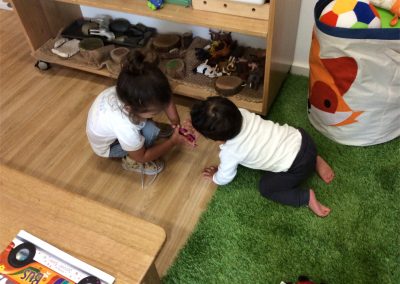 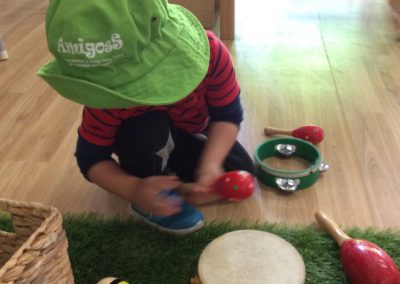 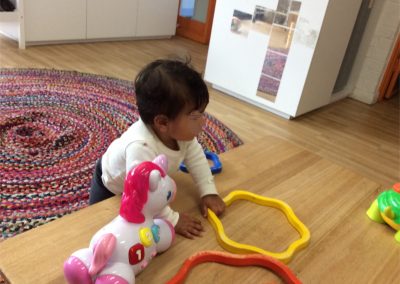 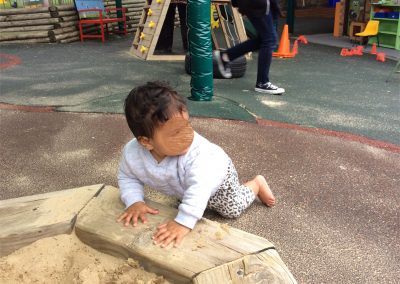 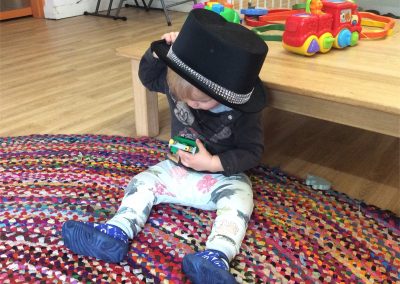 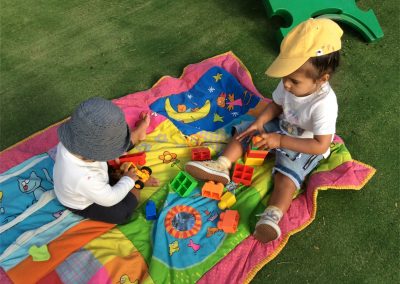