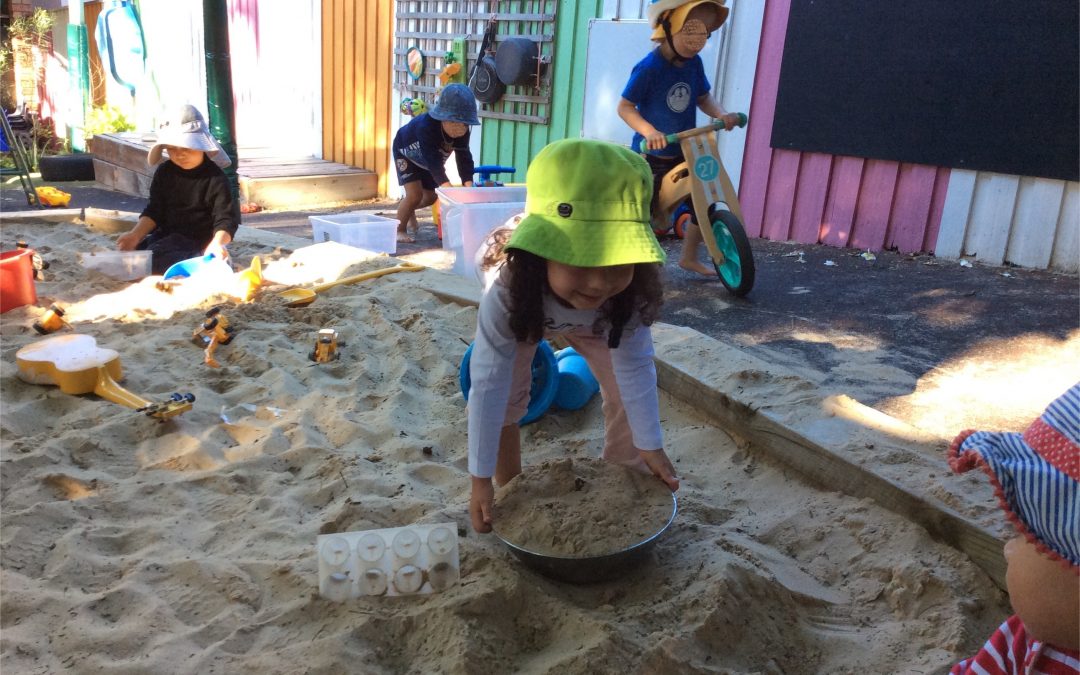 This week has been short but full of wonderful experiences. Lots of easter bunnies had help toddlers and babies to improve their hand dexterity and eye-hand coordination. They also explore their touch sense by sensorial experiences with slime and shaving foam. In the preschool class, Australian History Class had taken place learning about the ANZAC Day.

This week we were introduced to ANZAC Day, and children spoke about what they thought ANZAC Day might mean. We talked about the first ANZACs, and used the world globe to point out each country that the ANZACs came from and then visited, first sailing to Egypt to learn how to be soldiers, and then sailing to Gallipoli to fight. When they arrived by boat, the beach was too easily seen so many soldiers were hurt or killed before the war had even started. We talked about the conditions under which the soldiers were living, and their mode of transport to each place: boat.

We decided it would be fitting to recreate our own ANZAC boats and see if we could get them to float, so we used recycled materials and children worked to make and float boats (science: float and sink). We assessed our progress and our floatability, and talked about what we could they do to make them float better or have more stability.

We conducted the same experience on Wednesday, as we wanted to try again and build new and different boats from what we had learned the previous day, and to give everyone a chance to make a boat. Repetition of experiences provides the practice that children need to master new skills. Repetition helps to improve speed, increases confidence, and strengthens the connections in the brain that help children learn, and they will try something new and different each time, or follow their previous steps exactly to replicate the feeling of success at mastering a new skill.

We have also been learning about the soldier’s uniforms, and have had a look at the types of hats that the ANZAC soldiers wore. We were fascinated by the beautiful rising sun badge on the side of the slouch hat, which signified the spirit of the ANZAC soldiers, working together, taking care of each other and helping out with genuine kindness, no matter what side they were fighting on. We learned why one side of the hat is folded up, and then enjoyed collaging our own hats with some thick, rough paper and adding a ribbon to individualise each hat.

Appealing to our earlier learning this year about emotions and feelings, we talked about what happens when we fight and how people feel when they are fighting, or after a fight. We went through some relaxation and calming techniques to give children the tools to use these when they need to, and we talked about how after a fight, we might need to say ‘sorry’, maybe we have said some unkind things or hurt someone in another way. We drew a picture of us saying sorry to someone to consolidate these actions.

We learned about a musical instrument that was used during the war: the bugle. We had a look at some pictures of bugles and the shape, and then we listened to a series of recordings of this special instrument. We discovered that the bugle player played his or her instrument at the end of every day to signal the end of the fighting for the day, so the soldiers could hear it in the fields and they knew when they could go back to their tents and rest. We used some recycled materials to make our own bugle, including overlocker cones and rolled up newspaper, and the classroom was musical all afternoon!

Our learning this week has been deeply affective, with children using these new ideas and concepts in their play, and talking in group times about how sad the war must have been. The concern for others has shown a new element this week for our preschoolers, so be prepared to be asked some tricky questions at home! Their concern does not mean that we don’t talk about these things, it just means that we decide to approach it gently and answer the questions as they come, as honestly as we can. 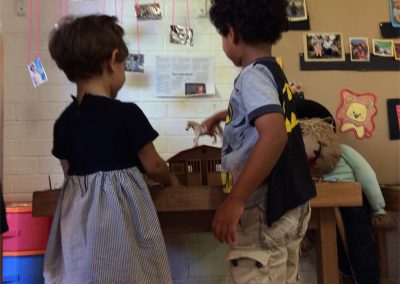 At the farm with the horses 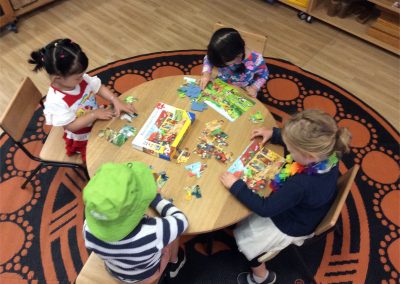 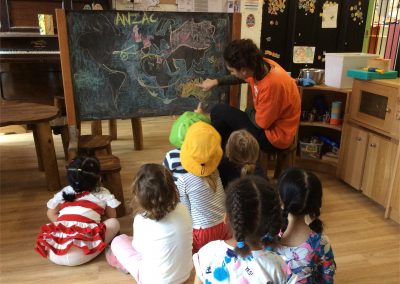 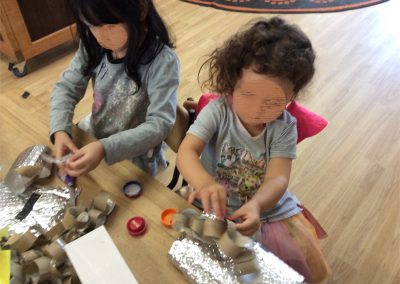 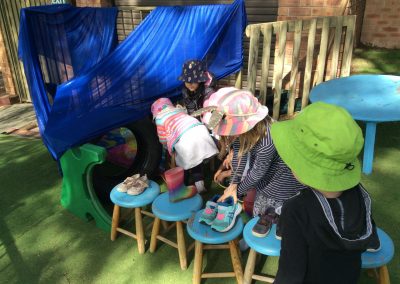 Shoes off before going into the house 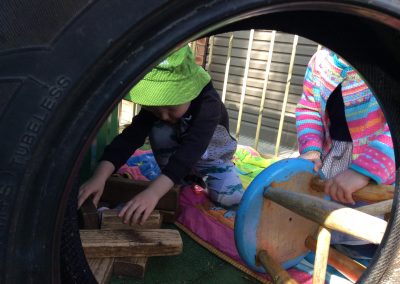 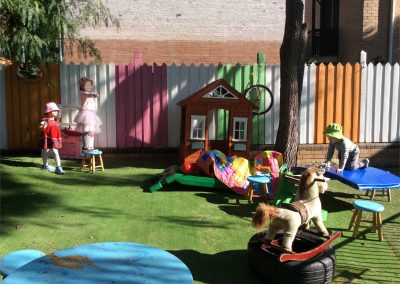 Repeating this experience, we decided to do this activity in a different day to get more children. We hided the eggs in room and letting children to find them, we collected all the eggs into a box. Once all the eggs were found, with some animal pictures, children opened the eggs finding small animals inside, matching this one to the pictures. To make this interesting, we asked children to make the sound of that animal in particular “Miau” el gato, said R.K. This experience helped to break the ice between children, including them more into the group to interact with others, developing social skills, Spanish vocabulary and cognitive skills by matching the plastic animals and the pictures.

The most favourite resources for children to make art and craft is definitively glitter. Why don’t we create our own glitter? Going in deep with Easter, we mixed it with science experiment so placing food coloring and vinegar in different cups, children put the egg shell inside of each cup, they chose the color they want. We reinforced the Spanish and we could observe how it turned from the original color to the color we wanted. When it got dry children smashed the shell with a stone, making it very small pieces. Once it was ready, children decorated their Easter draw with glitter, working on their finger muscles and cognitive skills.

As children enjoy the song sleepy bunnies, we will recreate this song in company with mask. Children made their bunny mask with cotton to make it fluffy. This experience helped them to increase their independence, choosing the color they want and the way they want to stick the cotton. Also, the song helps children develop language skills and Spanish vocabulary by repetition. 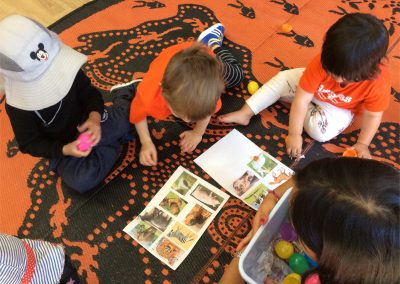 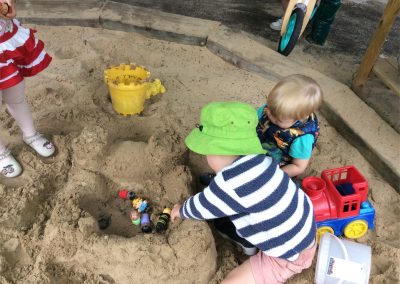 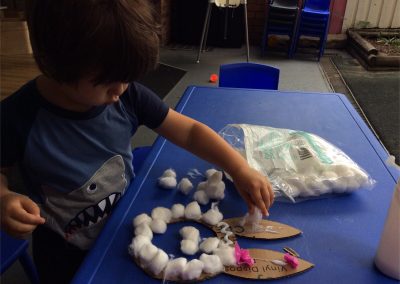 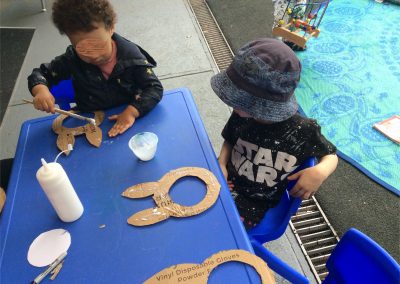 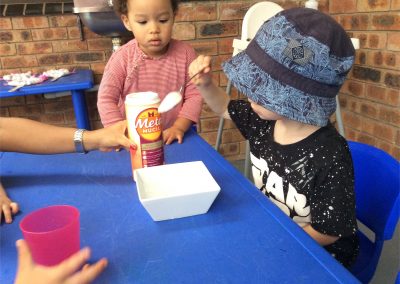 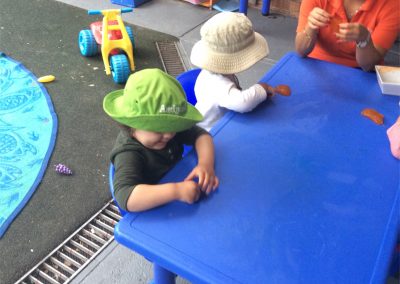 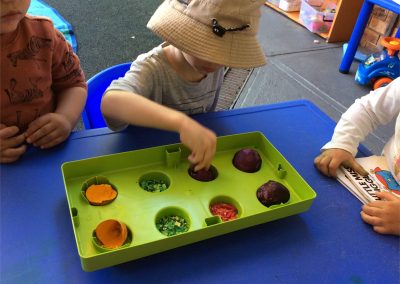 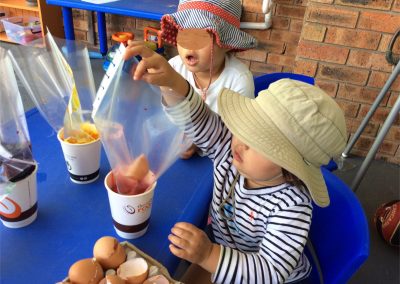 This week with Dylan we were doing very creative activities to celebrate Easter. We were first looking at the story of the Easter Bunny and his carrots; So, let’s get to work, we wanted to recreate the history by making our own art and craft. With Dylan’s footprints we made a beautiful carrot with a tie and with a paper plate we made our jumping rabbit that had huge ears with Dylan’s handprints. The activity was a lot of fun because I gave Dylan a chance to explore thick textures with his hands and use his own fingers to paint. 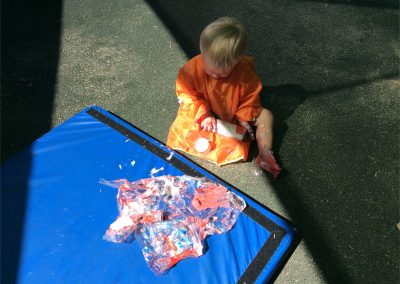 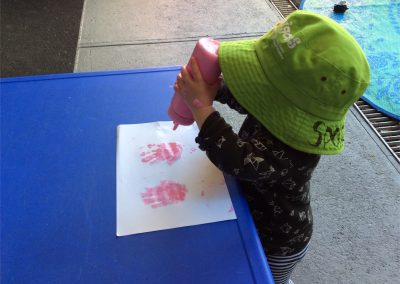 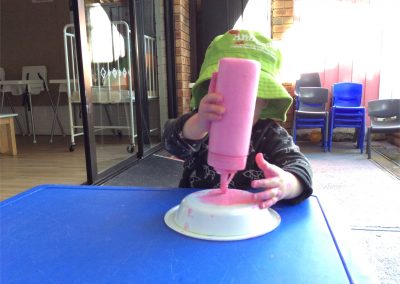