Newsletter from 16th to 23th April 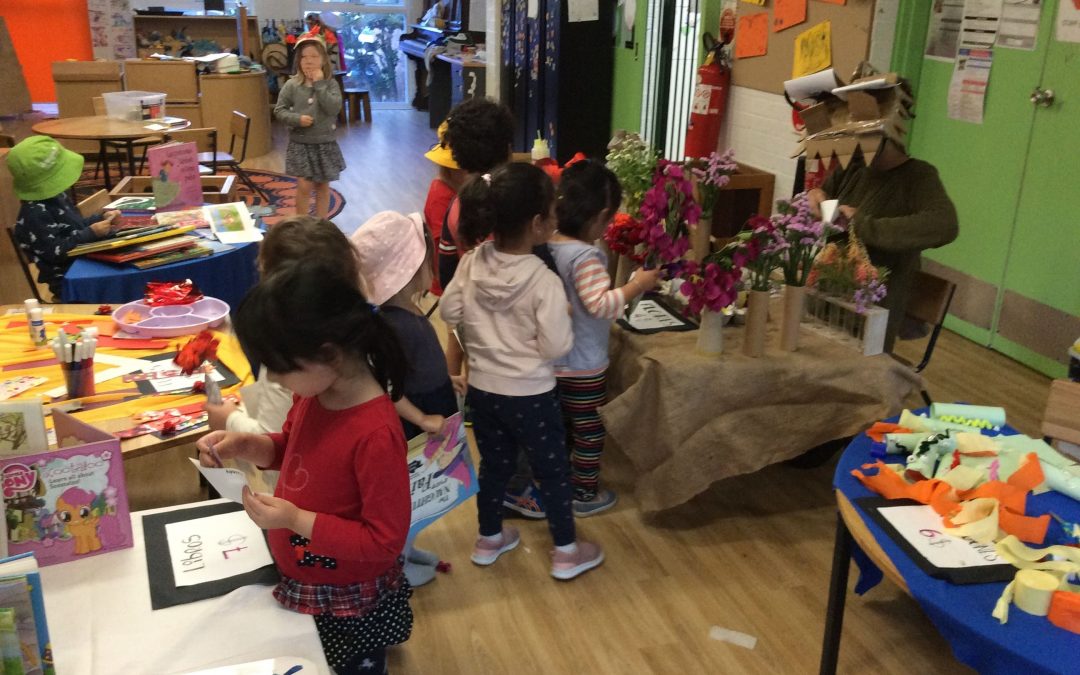 On Thursday, children had the opportunity to experience the markets of St.Jordi. We would like to pass on a BIG THANK YOU to all the families who made it possible and with their contributions, which allowed us to transport a bit of Barcelona into the preschool class.

Today the weather was amazing so we’ve tried our boats and made them sail making the wind blow with a cardboard. We’ve talk about some scientific concepts like float and sink and how do the boats move. This first test let us know we are pretty good shipbuilders because all of them floated really well and were able to hold several “people” on.

This week we talked about the medals we’ve seen, some of our parents even have one from a race they’ve run, swum or rowed, and maybe our grandparents even have some war medals. We learned about why ANZACS are awarded medals, looking at some photos and drawings of these medals, and we made our own medal out of cardboard and yellow paper, as well as some shiny golden cellophane. This experience taught us about companionship, bravery and helping one another, as well as working on our cutting skills as we cut the cardboard for the medals and the papers to decorate them. We thought about someone we might like to make a medal for, and awarded them their own medals!

We have been learning about how poppy flowers grew in the war fields, and after the war they were used to remember the soldiers who fought. We had a look at some photos of the Canberra war memorial. We drew and then painted some poppy flowers and stuck them on the wall like our own remembrance wall. Children had a look at some poppy seeds, and we talked about their uses -we even got to taste some!

We read ‘ANZAC Biscuits’ (Owen Swan & Phil Cummings) and we learned that families used to post these biscuits to those at war as they were cheap to make, nutritious, tasty, and lasted a long time! We had the chance to make our own ANZAC biscuits, and there were even enough for us to share some with our family members as we took them home in paper bags. Yum! Cooking experiences allow children to learn basic measurement skills and encourage turn taking and muscle strength development as they stir, mix and create.

St.Jordi´s Day is an important day of Barcelona. It is a very popular festival that combines culture and romanticism, celebrating both World Book Day and Valentine’s Day. Children had a real street fair in the classroom. They had a great time and learned so much about culture, craft, money, books, stories and dragons as they got to participate in a variety of flower based craft experiences, making dragon book marks, going to the flower stall and buying books with their pretend money. Even the dragron from the story came to our class! She told us the story was wrong, she doesn´t like to eat animals and even less, people. She said she was sad because everytime she came out, people would hide and she had no friends. We thought it would be a good idea to let her participate in our fair so people would see her nice and friendly from now on. 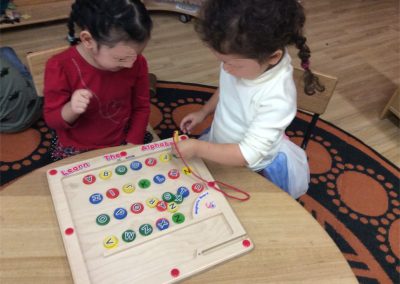 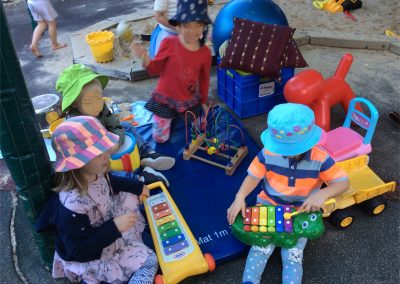 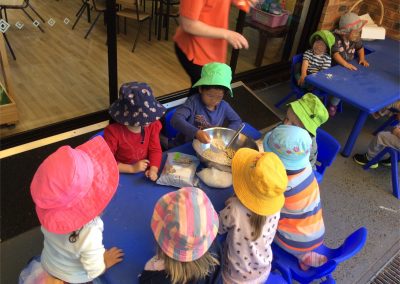 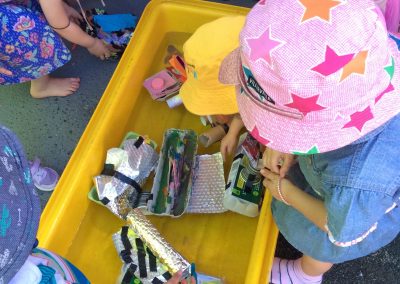 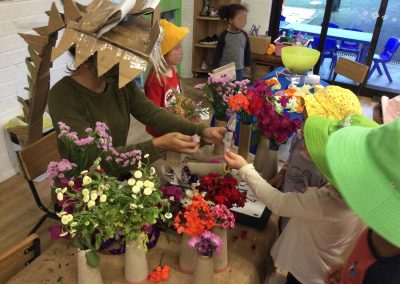 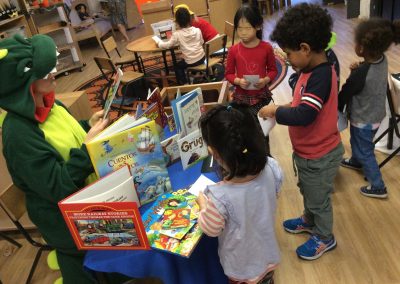 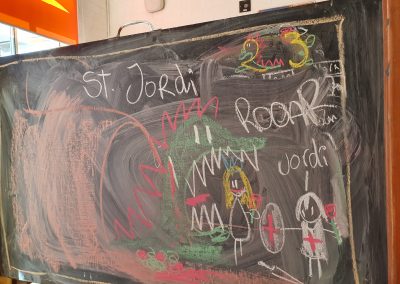 The legend of St. Jordi 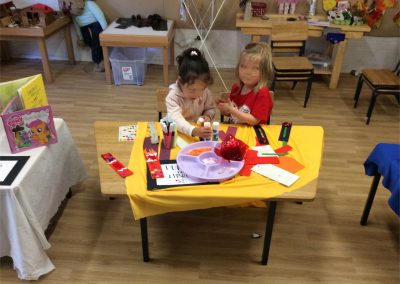 Celebrating Anzac day, we mix this event with sustainable practices. Using recycling materials, we introduced to children to the Poppy flowers. Then we collected all the materials to recreated them where everybody makes their flowers according to their own creativity. Children did not get much the idea of Anzac Day, but they replied positively to make the flowers. We used egg trays, red paint, wooden sticks, glue and scissors. Children worked on their fine motor’s skills, eye hand coordination and holding tools. We had so much fun creating these flowers.

Keeping working with the topic of the Poppin flower and taking advantage of the beautiful weather, we worked as a group to plant real flowers at outdoor area! We read a book to make children more familiarize with this type of flower so we collected all our gardening resources and let’s do it! Children places the seed in different pots, helping to put the soil underneath and on the top, following by watering and placing them in the garden. This experience helped children to understand about the world, taking responsibilities of the nature planting a new flower. This also make them respond with respect to other by taking care, watering and looking after the plant.

Introducing children why there are “Anzac biscuits” and the meaning of these, we watched a video of when people used to make the biscuits. Working in group with preschoolers, children learned from the old ones using role modelling. Toddlers seemed very excited to work as a big group, with same goal in mind, increasing their social skills. Toddlers are learning  about autonomy and independence, being able to cook their afternoon tea by themselves. “Yummy in my tummy” said R.C.

As next week we will start with a new topic, we planned a funny game with toddlers to related to the topic that is cars. Making a race with different types of cars sounds good but adding markers to the back part of the car to leave a mark on the paper sound even funnier! So we mixed this activity with colors and shapes, where children had the opportunity to choose the colors, and drive according the shape they wanted to do (circle, straight, etc.)  We made color race, working on our vocabulary, reinforcing Spanish colors and the most important, making strong bond with our friends. 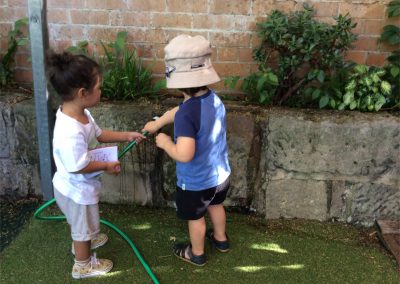 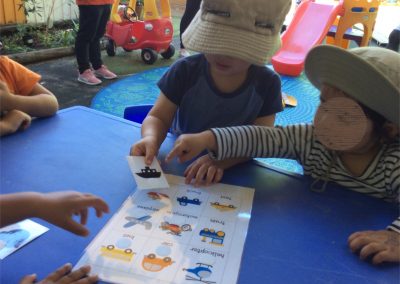 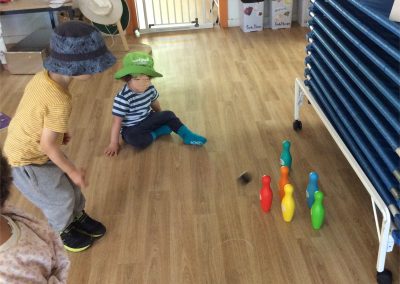 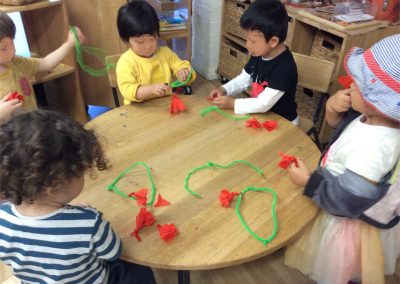 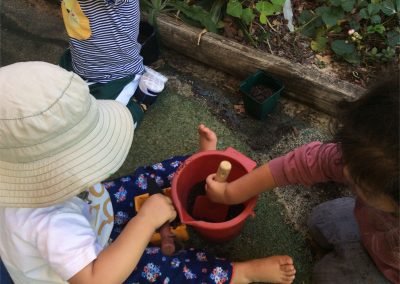 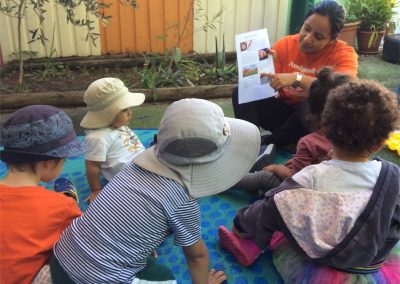 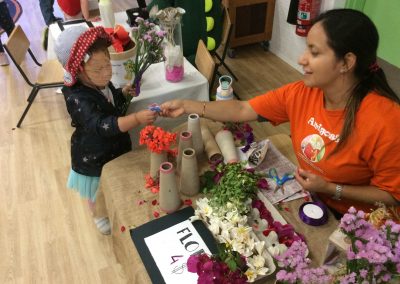 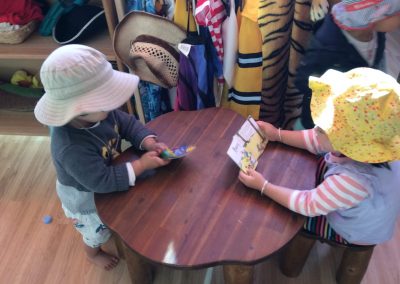 ANZAC Day is one of the most important national commemorative occasions in Australia, marking the anniversary of the first major military action fought by Australian and New Zealand armed forces during World War One.
With Dylan, we saw a video called “The Anzac Puppy”, and although he is still too young to understand, he was curious when he saw the puppy in the video. Every time he saw the puppy he made “woof-woof”.
When we finished the video, I made some cuts to paper rolls, making a flower shape and we started by painting red petals with them. It was funny for him to paint with other things and he looked more interested into stamping than with other paint experiences.

This week, we also started with the world of animals. Babies have shown interest in farm animals. We prepared a box with straw and put some plastic eggs inside. They had enjoyed discovering little animals and repeating the sounds they make. 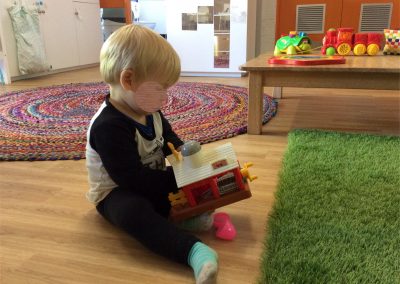 Playing with the farm 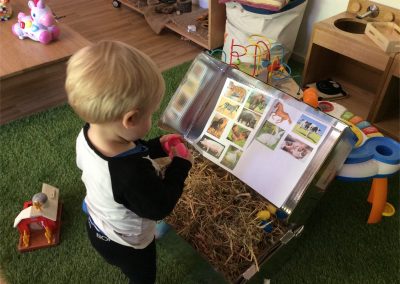 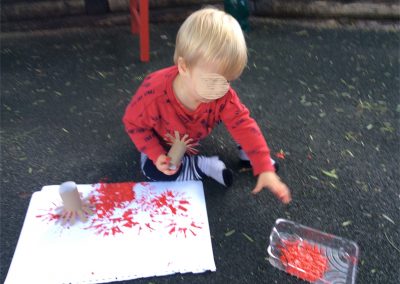